Gameplay resembles many vertical shooters of the time, but was made accommodating to beginners by lowering the overall difficulty.

Player characters are locked to their respective sides: Player 1 is always the Red unit (Hikaru Ichijyo) and Player 2 is always the Blue unit (Maximilian Jenius). The game consists of seven stages, each with a boss at the end. After the stage 7 boss is defeated, a second run will instantly begin. The game will only be finished after completing two runs, with staff credits displayed afterward.

The VF-1S Valkyrie cannot transform freely. Power-ups marked with the letters of each form are required to change. Each form also grants different attack patterns. Picking up the same form power-up (ex: F while in Fighter mode) will increase rapid-fire rate. Attack-based items can be collected and stacked for up to 8 levels. The screen-clearing bomb, a staple of shooters, comes in the form of Reaction weaponry.

When the rare A (armor) power-up is obtained, the VF-1S becomes an Armored Battroid which can launch grenades with missiles. After taking a hit, the armor is purged. All form power-ups obtained while armored will become bonus point items instead.[1] 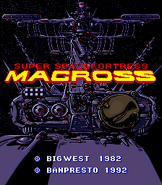 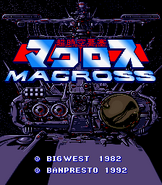 Australian Cabinet.
Add a photo to this gallery

Retrieved from "https://macross.fandom.com/wiki/Super_Spacefortress_Macross?oldid=42983"
Community content is available under CC-BY-SA unless otherwise noted.