Players take control of Hikaru Ichijyo, who is already an established pilot, and move through the beseiged Macross City and SDF-1 Macross as they prepare to fold away from the Zentradi bombardment. The succeeding missions then slavishly recreate scenes from the film, including the opening attack on the Macross battlefortress, the invasion within the ship and the rescue of Lynn Minmay. Players also participate in a new "Daedalus Manoeuvre" mission that wasn't seen in the film.

The gameplay is the standard side-scrolling shooter that is reminiscent of Super Dimension Fortress Macross (Famicom). Players take control of your standard VF-1 Valkyrie and can transform into its three configurations, Fighter, GERWALK and Battroid mode. There are three difficulty settings, where accomplishing "Easy" difficult will unlock a "Muteki" or "Invincible" mode which would allow players to blaze through unharmed. However, playing through the game on "Hard" difficulty will unlock a special "View Mode" which will allow players to view every illustrated still and cut scene stitched together without having to play through the game. There is also a "Game Only Mode" where players can play through the game without having to view a single cut scene.

There's an added challenge in that enemies can actually get behind to shoot players. Other instances has the SDF-1 Macross actually having its own life bar, which the player would need to protect. A SC-27 Star Goose would also appear from time to time to provide power-ups for the player to pick up. 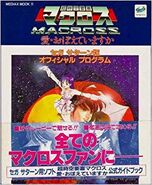 A "Mook-style" book (magazine book) for the game. 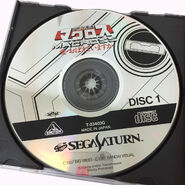 The first disc of the game.
Add a photo to this gallery

There was a mail-in gift offered for people who bought early copies of the PlayStation version. It was a music-playing card similar to the music plate belonging to the Protoculture civilization that Misa Hayase found in the movie. On this card was the purported last message from Lynn Minmay aboard the SDF-2 Megaroad-01 before it disappeared.

Retrieved from "https://macross.fandom.com/wiki/The_Super_Dimension_Fortress_Macross:_Do_You_Remember_Love%3F_(Game)?oldid=40612"
Community content is available under CC-BY-SA unless otherwise noted.