Production for The Super Dimension Fortress Macross: Do You Remember Love? initially planned to include an epilogue featuring Lynn Minmay singing the ending theme song "Angel's Paints" during her farewell concert tour.[1] Flashback 2012 was created to reproduce this scene, which would make it the final video work made based on the original Super Dimension Fortress Macross, and the last Macross-related work made during the Showa era. 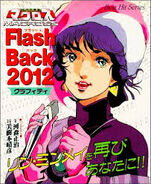 The cover for Macross Flashback 2012 Graffiti.

Retrieved from "https://macross.fandom.com/wiki/The_Super_Dimension_Fortress_Macross:_Flash_Back_2012?oldid=37498"
Community content is available under CC-BY-SA unless otherwise noted.