Uta Macross is the first true rhythm game for the Macross series. Macross games were previously mostly 2D and 3D shooters, with music as a side element to the gameplay. Uta Macross utilized 3D models of various diva / idol singers that sing and dance onscreen through a mode called "Simulation Live." Basic gameplay during this mode involves tapping the screen in accordance to four rows of rhythm notes falling from the back of the screen, while backgrounds feature scenes from the series animation, along with choreographed dances of characters and dialogue of characters encouraging the player.

Each diva / idol and Valkyrie grants special bonuses during gameplay and help build up the player's "Bio Fold Wave" in order to defeat the Stage Bosses and access Diva / Super Diva mode. New divas / idols, plates, costumes and songs are unlocked via achieving a high rank during Missions, "Ticket Events" and various other game modes. Players can also upgrade their divas/idols via increasing their "diva level," which would unlock Soul, Voice, Charm, Life, Support and Fold Wave as well as unlock SNS chats that reward song crystals.[1] A "gacha" mechanic is available to randomize loot drops where players can unlock unique items such as "Plates." Meanwhile, special items can also be purchased via the Chaos store using in-game currency.

Uta Macross utilize rhythm game mechanics that are very similar to other rhythm games on smartphone and tablet systems. Circular notes will drop from the top in accordance to the beat, instrumentals, or vocals of the song and players must time the proper inputs depending on the note type on the area the note will eventually drop down to. As players improve, the game becomes more centered around consistent performance and properly timing inputs as they will inevitably lead to higher scores and better rewards.

There are four main types of notes that may appear in a live performance:

DeNA officially announced the game's development on On March 21, 2016. A teaser was released on August 28, 2016 during broadcast. The commercial featured a dancing CG Freyja Wion and Minori Suzuki narrating what songs will be featured in the game. The trailer also featured several new artwork of classic Macross characters, along with sample gameplay footage.[3] A playable demo was released for attendees of Walküre's 2nd Live "Walküre ga Tomaranai" (Can't Stop Walküre) at Yokohama Arena (Yokohama, Japan) on January 28th, 29th, 2017. The game was delayed from an original release of Spring 2017 to Summer 2017.[4]

The game received a closed beta testing from June 22 through June 29, 2017. It was officially released on August 3, 2017 for Android and iOS smartphones, and could be accessed via Japanese Play Stores. [5] By August 22, 2017, the game had reached one million downloads. Special login bonuses, along with an exclusive AXIAのFLASH event featuring Kaname Buccaneer were available until September 4, 2017 for players to commemorate its success.[6] On March 2, 2018, the game achieved another milestone of two million downloads. Players could access the exclusive Niji-iro Kuma Kuma event to acquire Ranka Lee's "Twinkle Magic" costume to commemorate the milestone.[7]

Events are introduced with special themes.

Freyja Wion having a moment with Hayate Immelman.

In an all new scene exclusive to the game, we see Freyja ready to blast Hayate.

Freyja having fun with Hayate during a festival in a a new scene exclusive to the game.

New art featuring Hayate and Freyja during her sweet birthday.

Classic costumes can be unlocked, such as Lynn Minmay's movie stage costume.

Players can have idols / divas perform dances that they would never perform in the series. 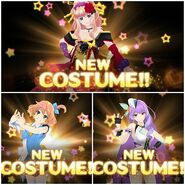 Sheryl-san in a very sexy Basara costume. Listen to her song!
Add a photo to this gallery

Retrieved from "https://macross.fandom.com/wiki/Uta_Macross_Sma-Pho_De-Culture?oldid=43853"
Community content is available under CC-BY-SA unless otherwise noted.