18.69 meters
The VF-0S Phoenix is a variable fighter upgrade in that appears in the Macross Zero OVA.

Much like the VF-1 Valkyrie that would follow it, the VF-0 series was built to benefit from several equipment packages that could enhance the variable fighter for specific missions. Unfortunately, the parts of the "Super Pack" ready for deployment included only the conformal fuel tanks/missile packs. When the need to outfit the VF-0A with heavy weaponry and increased fuel supply arose (known informally as the Anti-"Bird Man" battle), the carrier crew of the Asuka quickly assembled an equipment package from available parts.

This special modification was known initially as the VF-0 "Raid" but was changed to the "Angel" designation sometime afterwards, likely in response to the appearance of the craft once outfitted. When just the QF-2200D-B Ghost fighter was installed on the VF-0, the weight increased by approximately 35% while the total thrust of the combined VF/Ghost increased less than 20%. However, the afterburner thrust increased by 90%, ultimately resulting in a marked increase in maximum acceleration.

The Asuka crew had to rely upon virtual simulations to produce flight data that could be input into the VF-0 air combat computer, since the VFs were modified so quickly. Several factors altered the flight characteristics of the VF-0 "Angel" including the weight balance of the fighter's added munitions and more significantly the air flows of the VF-0 main wing as affected by the QF-2200D-B Ghost main wing. The complex ways in which these two wing surfaces interacted with each other at high speeds and high angles of attack left many gaps in the computer control scheme thus meaning the self-learning combat maneuver computer had to conduct data acquisition and analysis during flight to provide correcting actions. Coupled with the already dynamic nature of the Battroid mode's movements, this meant performance of the VF-0A "Angel" configuration relied heavily upon the skills of the pilot once in actual combat conditions.

The Special Attack/Assault Specification was installed on one VF-0A and one VF-0S and used only once in the battle at the island of Mayan in late 2008. U.N.G. pilot Shin Kudo and Roy Focker made use of a VF-0A "Angel"" and VF-0S "Angel" during that final mission. The equipment installation and final checks for the two units was supervised by the chief mechanic Raizou Nakajima. 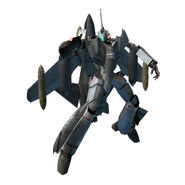 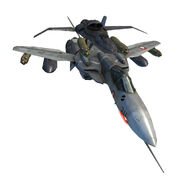 Retrieved from "https://macross.fandom.com/wiki/VF-0A_Phoenix_%22Angel%22?oldid=43097"
Community content is available under CC-BY-SA unless otherwise noted.