Two
The VF-0S Phoenix is a variable fighter that appears in the Macross Zero OVA.

The Northrop Grumman/Bellcom VF-0 Phoenix variable fighter was an advanced prototype for the VF-1 Valkyrie which served as a flight test unit and later in 2008 as a front-line fighter, before the Valkyrie's mass production in November 2008. The fighter was developed with OverTechnology obtained from the massive alien space ship that crashed on Earth in the year 1999.

In most respects, the VF-0 resembled the VF-1 Valkyrie, although its legs were longer because the EGF-127 conventional turbofan engines used by the fighter were larger and bulkier than the VF-1's FF-2001 thermonuclear engines/ Numerous fine details also differ, such as head designs. The VF-0D's wings are very different, replacing the variable sweep wings with a canard-delta configuration; although this would perform well, it would ultimately not be adopted for the production series VF-1.

The VF-0's maximum speed is Mach 2.74 at 11,000 m (36,000 ft) above sea level altitude, using variable intake slats to slow the inrushing air to subsonic velocity, rather than a single variable intake ramp. Because it uses conventional turbofan engines and not thermonuclear turbines like the later VF-1, the VF-0 is not a true spacecraft (although it can operate for short periods of time underwater).The VF-0's armament was virtually identical to the VF-1's (although the VF-1S's laser armament was bumped up from two to four barrels), but slightly older in design: A 35mm gun pod (GPU-9) in place of the VF-1's 55mm GU-11, and AIM-200 AMRAAM IIs (a development of the AIM-120 AMRAAM) air to air missiles in place of the VF-1's AMM-1s.

Several VF-0s, under the command of Roy Focker, were deployed from the aircraft carrier Asuka II (CVN-99). Many were destroyed in combat in the South Pacific against Anti-U.N. forces piloting SV-51 variable fighters in early 2008.

The VF-0 was succeeded in service by the VF-1 Valkyrie in late 2008/early 2009. After Space War I, the idea of an atmospheric-use variable fighter would be resurrected years later to provide an inexpensive combat mecha for various planetary defense forces with the VF-3000 "Star Crusader" and the VF-5000 "Star Mirage".

During development of the VF-1 Valkyrie, the U.N. Spacy development teams found it necessary to utilize other variable fighters as test beds and trial production models for the various new OverTechnology systems. The VF-0 Phoenix was one such variable fighter begun in 2002, an experimental series of VF manufactured after inheriting the F-14 Tomcat experimental system group. Delivery of the first completed craft occurred in 2004 and in 2008 the VF-0 Phoenix was utilized in combat when delivery of the thermonuclear reaction engines delayed deployment of the VF-1 Valkyrie. Although the VF-0 was used for various tests and strategic research, it was not considered for combat until reports the Anti-UN Alliance organized a VF experiment combat group. Once the Anti-UN threat of a variable vehicle surfaced, the VF-0 was equipped for actual combat and productions increased rapidly. The transformation mechanisms, energy conversion armor and active stealth capabilities would have a major impact on later VF development and would be placed into practical use after the VF-1 Valkyrie. The Phoenix was deployed around the island of Mayan in the South Pacific Ocean that same year and many VF-0 variable fighters participated in an operation to combat Anti-U.N. forces for the purpose of recovering of an alien artifact.

The VF-0A was a successfully deployed unit, but was only produced in small numbers as production resources were devoted to the more advanced VF-1 Valkyrie that would follow. The U.N. Spacy manufactured 24 VF-0A general-issue single-seater fighters, 4 two-seater fighters and 2 two-seater armed reconnaissance units. Six single-seat types and 18 two-seater types of the delta wing VF-0D units were constructed as well as 4 VF-0S commander versions. Also built was VF-0B two-seater versions of the A type for the UN Spacy produced under trial basis and VF-0C single-seat versions of the D type for testing by the Marine Corps who were struggling with aging aircraft. U.N.G. pilots Shin Kudo and Edgar LaSalle piloted VF-0 fighters as did ace pilot Roy Focker when conducting operations around the island of Mayan in 2008.

NOTE: During development of the Macross game for the Playstation 2, when the VF-0 was being considered for inclusion, it was named "Phoenix" (ultimately, the VF-0 was not included in the game). This "pet name" was then dropped only to reappear in 2008 on the official Macross Frontier website. The Macross Chronicle (2008) has since made the name "Phoenix" official. 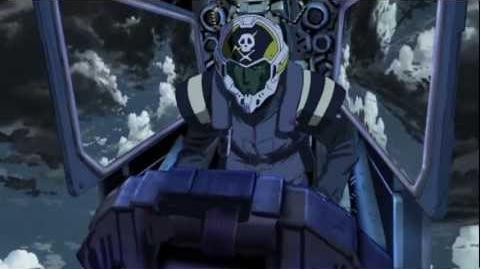 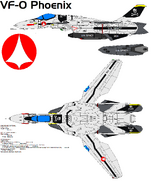 Mechanical designer Shōji Kawamori says he initially planned the main vehicle of Macross Zero to be closer in lineage to conventional fighters such as the F-14 Tomcat. He later opted for the finalized VF-0 design which was closer to later variable fighters in the Macross setting (aside from the relatively conventional engines).