The VF-171EX Nightmare Plus is a variable fighter that appeared in the Macross Frontier television series and the Macross Δ Gaiden: Macross E manga.

The VF-171 Nightmare Plus is the current New United Nations Spacy main variable fighter that evolved from the VF-17S Nightmare built in the late 2030s. The VF-17 Nightmare was designed by General Galaxy originally as a heavy variable fighter for special operations, but the New U.N. Spacy wished to pursue a mass production model of the Nightmare that would be built in far greater numbers.

This version of the VF-171 multipurpose heavy fighter is specifically designed as an anti-Vajra variant with equipment improvements, a cockpit for accomodating EX-Gear, enhanced engines and MDE armaments.

A detailed view of the VF-171EX in fighter mode, the radome tucked in ready to be deployed. 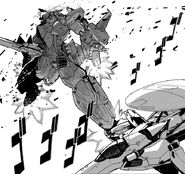 Kite's VF-171EX breaking off from his wingmates of Echo Flight.

Another view of Kite's VF-171EX.
Add a photo to this gallery

Retrieved from "https://macross.fandom.com/wiki/VF-171EX_Nightmare_Plus?oldid=38584"
Community content is available under CC-BY-SA unless otherwise noted.