The VF-25 Messiah is one of the newest-generation variable fighters used by the New United Nations Spacy in 2059. The VF-25 was independently developed by Shinsei Industries, Macross Frontier Arsenal Original Development and the LAI Corporation from the YF-24 Evolution prototype as the potential successor to the VF-171 Nightmare Plus, the current main variable fighter. Different from previous variable fighter designs, the VF-25 has an additional cockpit system called the Ex-Gear which allows pilots to withstand high G-forces. It also allows wired or wireless remote control for the VF-25.

The Messiah is armed with numerous offensive weapons that include a gatling gun, beam cannons, laser guns mounted in the head unit and a close-combat knife housed within the shield. The VF-25 is built for multipurpose operation and can be customized according to the pilot and the characteristics of the mission. By exchanging multipurpose modules the variable fighter is able to operate as a fighter craft, an attack craft, a fighter-bomber, a reconnaissance craft and command craft for unmanned combat aerial vehicles.

Normally, a VF-series' energy converting armor is not active in fighter mode while surplus energy from the engines is used in Battroid mode, however, due to the APS-25A/M25 high-capacity capacitor for the beam guns, energy converting armor is available in all modes. High capacity capacitor built into frontal section of the booster pod. Due to increased waste heat, four armored heat sinks (2 on the right and left with built-in Phased array radar) added to the engine pods. APS-25A/P-011 armored block for the aircraft nose exists but was waived due the opinion of Ozma Lee that visibility in close-quarter combat and emergency escape of the aircraft nose was lost. A pinpoint barrier has been centered on the nose to compensate for the lost of armor. Trial manufacture Tornado pack, for dual-use within atmosphere and outside of atmosphere, has lower air resistance than Super Packs. Tornado pack made exclusively for the VF-25 is more expensive than Armored pack. Since the flight path is reminiscent of a tornado, it was given the pet name, "Tornado". Additional Tornado pack equipment for outer-space use. 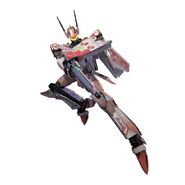 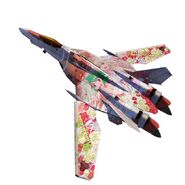 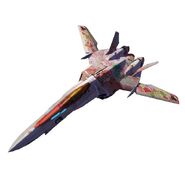 Retrieved from "https://macross.fandom.com/wiki/VF-25F_Messiah?oldid=42863"
Community content is available under CC-BY-SA unless otherwise noted.