The VF-31A Kairos is a variable fighter featured in the Macross Δ television series. It is the mainstay fighter for Alpha, Beta and Gamma Flight for Chaos.

Following the establishment of the New United Nations Government, new and better airframes were commissioned as concerns grew over the growing independence of long distance emmigrant fleets and distant colony worlds. The VF-31A Kairos was first developed by S.M.S.' Ouroboros Branch in cooperation with several other companies including Surya Aerospace and the LAI Corporation, and based on the high performance prototype YF-30 Chronos.[1] Research and design was provided by S.M.S. recruit Aisha Blanchette. Though superior in performance compared to the aging VF-171 Nightmare Plus fielded by the New United Nations Spacy, it proved inferior to the the Windermere Kingdom's Sv-262 Draken III.

A special multipurpose container unit was added from the YF-30 to enable enable multi-role functions in the battlefield. Some versions were outfitted with an Inertia Store Converter and EG-01M/MP EX-Gear system, however, due to the rarity of pure Fold Quartz crystals, a cheaper to produce Fold Carbon is used instead. This results in a drop in performance compared to the YF-30, but at least comparable to the VF-25 Messiah.

The private group Chaos would later use the Kairos as a base to develop the Seigfried series for Delta Flight, outfitting it with a Fold Resonance System.

A number of VF-31A were supplied to the military division of Chaos, and each unit's performance during actual battle operations doubled as evaluation tests. Several units supplied to Delta Flight for the Ragna branch were heavily customized for escort duties of the tactical music unit "Walküre", and came to be known as "Seigfried". 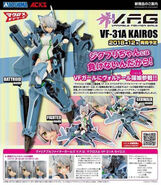 VF-31A was turned into a Variable Fighter Girl.

VF-31A, Fighter Mode.
Add a photo to this gallery

The VF-31 and its variants were planned to adopt the same close-coupled delta wing as YF-30 Chronos, but it was ultimately dropped due to similarties with the Sv-262 Draken III and its double delta wing. Series organizers felt it would be too difficult for viewers to distinguish the main character's variable fighters, thus Delta Flight units adopted a forward-swept wing design.

The vertical tail is arranged inward in the middle of the forward wing (so the wings look like a "Δ" when viewed from the front). The main variable fighter type (Kairos) has a more close-coupled delta wing aircraft as it was originally intended by the series planners.

Other than the fighter's wings, the “folding of the nose”, “housing method of hands and legs”, “arm gun (mini gun pod)”, “large-sized canard ”, “division of the toes”, etc. have changed from the YF-30.

Retrieved from "https://macross.fandom.com/wiki/VF-31A_Kairos?oldid=39910"
Community content is available under CC-BY-SA unless otherwise noted.