Vanessa was originally from France before moving to South Ataria Island when she was 21 years old. She became one of the SDF-1 Macross' bridge operators and was in charge of communication and radar. She is one of the older officers on the bridge, next to Claudia LaSalle, and is considered reliable and trusted by her peers.

Vanessa was present on the bridge of the SDF-1 Macross during its launch day, which occurred on February 7, 2009.[1] She engaged in the banter after First Lieutenant Misa Hayase entered the bridge, jokingly saying she was surprised that her commanding officer was interested in men. (SDFM: "Boobytrap")

Later that day, during the calm before the battle, Vanessa reported to Captain Global that she had detected 24 additional UFOs on a descent vector to the Macross. She couldn't detect them before because the Reaction Weaponry used to intercept the first attack wave rendered their radar ineffective.

Vanessa would retire early and marry Loli Dosel. Loli himself was originally part of the Zentradi Army 8th Forced Reconnaissance Unit. They worked together to open a small general store, but Loli later became an alcoholic and was forced to close soon after. Vanessa eventually ended up working as a hostess to provide income to their household. She later gained a batch of regular customers due to her good looks and calm demeanor.

Several years later, Vanessa was made the head of a high-class club and led a busy life. Nearly thirty five years later, in A.D. 2045, she lived in a luxury apartment in Macross City on the Earth. Loli meanwhile stayed at home and looked after their three children. Finally, both Warera Nantes and Conda Bromco ended up wasting their lives due to alcoholism, and lived under the same roof as Loli.[2] 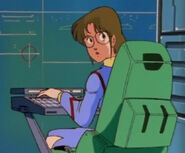 Kim in her communication table.

Vanessa staring at her monitor.

Vanessa out of earshot by Kim's gossiping.