Walküre (ワルキューレ, Warukyūre, German for Valkyrie), is a tactical sound unit featured in the Macross Δ television series and its theatrical adaptation, Macross Δ Movie: Passionate Walküre. It also refers to the real life idol-group made up of the characters' voice actresses.

Walküre is the idol group that performs live concerts to suppress the Vár Syndrome, under the protection of Delta Flight who also double as its sideshow performers. Members sing with their trans-dimensional voices which produce "Bio Fold Waves" that suppress symptoms of the Vár. During terrestrial live shows, "Cygnus" multi-drones released by Delta Flight before every performance serve as their shields, amplifiers and special effects props.

Walküre is also the real-life five member idol group that have performed in several live concerts and numerous events since 2016. Series creator Shōji Kawamori described each member as such, Minori Suzuki is "new, bright and emotionally rich," JUNNA is "powerful and lyrical," Kiyono Yasuno is "perception and strength," Nao Tōyama is "geek hacker" and Nozomi Nishida is described as "charming idol."[1] All recordings were first conducted separately, and the opportunity for all members to come together for the first time was on March 2016. Masao Fukuda, the music producer for the series, wanted the songs to have a sense of "durability," that "would be loved for a long time, across generations, similar to Do You Remember Love (1984)." His goal was for the songs to have an "addictive" quality which would let people listen to them again and again without getting tired.[2]

The Walküre members are able to disguise themselves or change costumes at will using specialized holo bodysuits. Their suits are also equipped with gas jet clusters, enabling them to be mobile in the concert stage, as well the battlefield. Each member have unique ways of flashing her signature "W" sign. For example, the group's center, Mikumo Guynemer, flashes the "W" signs with both her hands. Meanwhile, Reina Prowler and Makina Nakajima both pose together when flashing the "W" sign. They usually end their concerts by saying, "May the sea of stars be blessed by the goddess."

Walküre members have been selected because they possess fold receptors that have a sufficient active ratio, recruited through periodic auditions. When the members sing, they generate biological fold waves that calms down the Vár. The reaction is significantly amplified in the battlefield or when a member's life is in danger. This is not a permanent cure, however. As revealed later in the series, the Vár Syndrome is accelerated after a significant portion of the people has ingested Windermerian apples and water. This aspect is not revealed in the theatrical adaptation, Macross Δ Movie: Passionate Walküre.

The concerts, called "Waccines," must be live shows, not pre-recorded songs. If a song is recorded, broadcast, or digitized, the effects are negligible. There are cases where Var can be supressed however, as demonstrated by Delta Flight pilot Messer Ihlefeld listening to Kaname Buccaneer's single "AXIA~Daisuki de Daikirai~" on his music player.

In an effort to produce an effective tactical sound unit, research went into studying previous units such as the Sound Force, Jamming Birds, as well as former idols Sheryl Nome and Ranka Lee.[7] As member of the newly established "Music Division" of Chaos, Arad Mölders recruited Kaname Buccaneer to be its first "idol" due to her experiences as a singer and having seen war in her home planet Divide. She was briefed on fold receptors and plans to form a Walküre, a "tactical sound unit." Kaname was originally slated to be a trainer and manager before she was tested for fold receptor potential. She would then be selected to perform alongside Reina Prowler, a hacking expert from Chaos' Intelligence Department.[8]

Public auditions were held, and new recruits Makina Nakajima, Claire Paddle and Lydie LeGrand were added to Walküre's ranks. Rigorous survival training and singing and dancing lessons were conducted for the then-fledgling sound unit, but little progress is made because aside from Kaname, almost all of the members have no combat experience. Another issue was the constant friction between Makina and Reina, usually caused by the latter's refusal to participate. Lydie quits midway through training.[8]

Walküre makes their formal debut as a unit of four (essentially three, since Reina was still non-cooperative) and were deployed to perform several live operations. However, all of them ended in failure, as they had little effect on people infected with the Vár Syndrome.

During one such operation, Kaname faced certain doom at the hands of a Vár-infected Zentradi but was rescued by Arad Mölders, now leader of Delta Flight. Back in Ragna, Arad meets with Kaname in a cafe, proposing that Walküre and Delta Flight should do co-op training to improve the quality of their performances with special effects, air shows and other similar stunts.

They faced yet another setback as the major backer of Chaos, the mysterious "Lady M," informed them that they will be disbanded if they fail the next mission.

Makina, who was considering quitting at the time, has a change of heart and made costumes for everyone, as she felt that the standard combat uniforms were not suitable for idols like themselves. The improved presentation, wardrobe and subsequent side-by-side sorties with Delta Flight proved fruitful. Messer Ihlefeld would later join Delta Flight following a successful performance in the planet Alfheim.

Walküre quickly gained fame around the galaxy, but Claire suddenly quits the group as she was no longer able to handle the stress of performing in the battlefield.

Mikumo Guynemer was later introduced to Walküre. She did not go through any screenings or auditions, but her singing voice and bio-fold receptors were beyond anything the group has heard since; so much that she becomes the lead singer of the group, taking Kaname's position.

Inspired by Mikumo's voice, Reina finally starts to contribute to the group's performance (improving her relationship with Makina in the process) and the former would serve as the lead singer of Walküre for the next few years.[8]

The third wave of final auditions were held in the planet Ragna.

Freyja Wion from the planet Windermere was given special permission to participate despite not having gone through the preliminaries. There were no passers, but a few Chaos and Walküre members hold a special audition for Freyja to awaken her dormant potential. This was done by staging a life-and-death situation in a stalled suspension rail car with a Var-infected victim.

In the theatrical adaptation, Freyja completely missed the third audition, and was besieged on all sides by the Vár-infected crew members of the cargo ship where she was a stowaway. She became a part of Walküre after being rescued by Delta Flight pilot Hayate Immelman, since she was shown to have high fold receptor potential when she placated a cargo ship crew member with her singing.

The opening theme of Macross Δ "Ichido Dake no Koi Nara" was released online through a promotion video (PV) where Walküre appeared live for the first time prior to the series debut. The official video on YouTube[10] has exceeded 18.125 million views (as of August 2020).

Walküre's debut single "Ichido Dake no Koi Nara / Rune ga Pika tto Hikattara" charted on the Oricon Daily Charts at No. 2 and No. 3 in the Weekly Chart.[11] A commemorative free mini live concert was performed at Lazona Kawasaki Plaza. Nearly 10,000 people appeared to see the event. Walküre members then appeared in the music portion of "Mezamashi TV" on May 18, 2016,[12] "Debut song was only stopped by Hikaru Utada, which got the first place in distribution ranking!" was introduced.

In 2017, the rare track album "Walküre Will Not Stop" was released on January 25th. On January 28th and 29th, "SANKYO presents Macross Δ Tactical Music Unit" Walküre "2nd LIVE in Yokohama Arena "Walkure Will Not Stop" was held, with more than 22,000 attendees in two days.[13] Ami Koshimizu and Youko Hikasa, who played former Walküre member Claire Paddle, also appeared in guest performances on the 29th.[14]

On February 14, 2018, a third single "Walküre Won't Betray You" was released to coincide with the debut of Macross Δ Movie: Passionate Walküre. On February 24th and 25th at Yokohama Arena, "SANKYO presents" "Macross Δ Tactical Music Unit" Walküre "3rd LIVE" Walküre Does Not Betray You" at Yokohama Arena".[16] Live viewing was held at a Korean movie theater, Hong Kong, Taiwan, and parts of Japan.[17] On September 23, "Toyosu PIT" performed a "sensational premium live event" and announced the production of the second full movie version of the movie.

In addition, each of Walküre's five members debuted as a solo artists under the FlyingDog label. JUNNA, Minori Suzuki are having their music produced by the same lyricists and composers for Walküre. Kiyono Yasuno and Nozomi Nishida have also pursued solo careers under FlyingDog.

In February 2019, all members of Walküre made an appearance at the FlyingDog 10th Anniversary Festival - INU Fest! concert. They then performed alongside many other Macross singing veterans at the Macross Crossover Live 2019 two-day concert event at the Makuhari Messe Hall in Tokyo.

Another stage shot of Walküre. 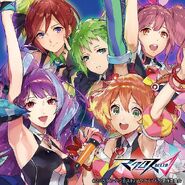 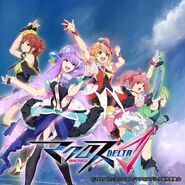 Real life Walküre members JUNNA and Minori Suzuki posing before their performance in the United States.

Walküre posing for a baseball event that was unfortunately cancelled due to heavy rain.

Walkūre group posing with Shōji Kawamori and many other familiar Macross personalities.

Promotional art for the cancelled fourth live concert in 2020.

Promotional art for the cancelled fourth live concert due to the pandemic.