The YF-21 is an experimental variable fighter featured in the Macross Plus OVA and its theatrical adaptation, Macross Plus Movie Edition. It was part of U.N. Spacy's Advanced Variable Fighter initiative under Project Super Nova. The prototype was piloted by Guld Goa Bowman.

It ultimately lost to the YF-19, although a handful of its final version were still produced under special circumstances. The YF-21 served as a prototype for the VF-22 Sturmvogel II, which later appeared in Macross 7, often used by ace pilots.

In test sorties the YF-21 achieved performance results far beyond last generation variable fighters and the BDS/BDI system was clearly a recognizable improvement over conventional control systems. The YF-21 made use of variable wing cant for incredible speed and, like the YF-19, could achieve satellite orbit unassisted. While most VFs have traditionally situated the main engines within the legs of the Battroid, the YF-21 arranged the engine block in the main body with independent legs. By discarding the mostly dead weight of the arms and legs, the limiter-release mode can attain performance reaching the fuselage design limits and attain high manueverability combat performance exceeding other VFs. However, the pilot operating the limit-release mode bears the effect of dangerous G-forces which exceed the limits of the human body. While the YF-21 was a groundbreaking fighter, development of the craft was hindered by several misfortunes and technologies of questionable practical worth that were either unreliable (BDI/BDS) or too expensive for mass production (composite material wing).

In January 2040, the problems of the YF-21 began appearing more frequently. Test pilot Guld Goa Bowman suffered temporary loss of control of the YF-21 prototype No. 2 in the first fire control system test, which some attributed to failings inherent in the delicate BDS/BDI systems in which control can be lost when mind feedback fails. An investigation by UNAF Super Nova AVF project director, Colonel Millard Johnson, determined later that month that Bowman may have had a neurochemical imbalance attributed to the pilot's Zentradi-Human genetics. Ultimately Colonel Millard suppressed these findings, choosing to retain Bowman as the YF-21 test pilot. In March 2040, Bowman piloted the YF-21 and was ordered to pursue the YF-19 when it was stolen by Isamu Dyson ; Dyson planned to disrupt the introduction of the X-9 Ghost on Earth in protest over the February halting of Project Super Nova AVF by the UNG. In what became known as the "Sharon Apple Incident ", the YF-21 and X-9 Ghost were both destroyed in a collision following an intense air battle. In 2041, the UNG announced the YF-19 (re-designated VF-19) as the next generation main variable fighter. Though the YF-21 fighter lost Project Super Nova and it production cost was high, the performance of the YF-21 was highly praised and General Galaxy did secure an important contract with the UNS that produced the similar VF-22 Sturmvogel II. In 2042 a small number of VF-22 Sturmvogel II variable fighters were deployed as the special operations units.

The General Galaxy YF-21 was built for the Project Super Nova Advanced Variable Fighter (AVF), a competition for a contract with the United Nations Air Force (UNAF) and United Nations Spacy (UNS) to replace the older VF-11 Thunderbolt main variable fighter. When the UNAF announced General Galaxy as one of two final demonstration/validation phase contractors, the company produced two prototypes and a ground based avionics test bed. Development on the YF-21 began in 2034 and produced prototype No. 1 for first flight in 2039. However, it was the first flight of the YF-21 prototype No. 2 at New Edwards Test Flight Center on Planet Eden in January 2040 that General Galaxy revealed the true nature of their next generation fighter.

The second prototype eschewed the conventional control cockpit of protoype No. 1 and was integrated with two experimental systems designated brain direct interface system (BDS) and brain direct image system (BDI) in an attempt to achieve unification of pilot and airframe. The BDS allowed the pilot of the YF-21 to operate every control at will and BDI offered an unprecedented view around the craft. Equipping the YF-21 with this unique control system that improved pilot response time and situational awareness, as well as an airframe of advanced composite material that could alter wing shape/size, it was clear General Galaxy was determined to win the competition with a technologically superior craft with a key characteristic being an emphasis on high mobility performance. 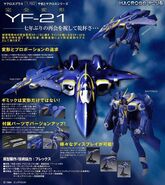