14.15 meters
The YF-29 Durandal (YF-29 デュランダル, YF-29 De~yurandaru) is a high performance variable fighter first seen in Macross Frontier Movie: The Wings of Goodbye. It was specifically designed to counter the Vajra during the Vajra War and is a sibling unit to the VF-25 Messiah.

In A.D. 2048, the Vajra threat became apparent to the New United Nations Spacy as a result of the Gallia 4 incident. To combat the Vajra specifically, the YF-29 was developed in secret with the intention to exceed capabilities of the YF-24 Evolution, a more general purpose next generation variable fighter being developed at that time. Hence, the YF-29 Durandal became a sibling unit of the similarly designed VF-25 Messiah in which LAI Corporation and the Macross Frontier fleet engineers played a central role.

The most significant difference from the VF-25 Messiah is that the YF-29 Durandal features four thermonuclear reaction turbine engines producing a breakthrough in maneuverability performance as a result of greater thrust. The main wings can extend and contract, allowing the wing-mounted engines to be brought closer into the airframe's center of gravity.

The VF-25 Messiah – despite being an excellent craft – requires additional equipment like the Armor pack or Tornado pack to effectively oppose the Vajra. The Tornado pack is trial-production hardware for proof-of-concept/data collection and as such it makes the VF-25 Messiah airframe cumbersome. The aerodynamic performance of the YF-29 is improved over the Tornado pack because the twin beam cannon can be stored within the fuselage.

In contrast to the VF-25 Tornado pack, the YF-29 features Fold Quartz (extracted from the Vajra) integrated into various systems such as energy converting armor or the fold wave projectors. This fold quartz integration grants the YF-29 Durandal capabilities greater than equivalent standard equipment. Though the YF-29 Durandal shares the VF-25 silhouette, the reworked airframe deviates significantly such that fuselage strength is improved. The YF-29 has acquired the armor strength of the VF-25 Armored pack.

The application of natural-shaped, highly-purified "Philosopher's Stone" fold quartz is the most important design element of the YF-29 Durandal, but is difficult to acquire from Vajra corpses. To harness the fold quartz requires use of an innovation called the Fold Wave system which produces an inexhaustible supply of energy for the YF-29. The Fold Wave hardware is an overdrive system featuring four Fold Quartz and a total of four fold wave devices. These devices were named after the four relics contained in the golden hilt of the saintly sword Durandal; "Saint Peter's tooth", "Saint Basil's blood", "Saint Denis' hair", and "piece of the Blessed Virgin Mary's raiment". Once completed, the YF-29 featured impressive anti-Vajra performance that made operation of the craft very distinctive. In addition to capabilities like communications tracing, the YF-29 can jam Vajra communications through intervention and obstruction of Vajra fold networks via fold waves.

The YF-29 development had been advanced because of the need for anti-Vajra deployment. Strategic Military Services (S.M.S.) pilot Alto Saotome operated a YF-29 Durandal hastily built by arranging parts from the VF-25 Messiah. Therefore, it has unique performance unlike the original design. However, the combat performance of the existing airframe was surpassed in actual combat.

Pilot Saotome even used the Super Pack missile launchers to fire while ejected from the YF-29 itself. The fold wave capability of the YF-29 Durandal delivered the fold song to the front lines that played a major role at the end of the conflict with the Vajra. 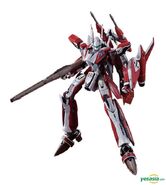 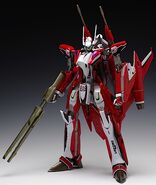 Retrieved from "https://macross.fandom.com/wiki/YF-29_Durandal?oldid=41719"
Community content is available under CC-BY-SA unless otherwise noted.