An active girl who loves tinkering with machines, especially Variable Fighters. For some reason, Yui talks in classic Japanese, making her sound like an old man.

Due to her a big appetite, Yui always has rations in her pockets to nibble on, claiming that its an absolute must while doing repair work.[1][2]

After years of being around machines, Yui can not only fix them, but also easily operate different kinds of variable fighters and Destroids. When macronized, Zentradi battle armor is also no problem for her.[1][2]

Yui enlisted in New United Nations Spacy to serve as maintenance crew because of her love for machinery. Unfortunately for her, the results of her aptitude exam were so good that she was reassigned as a pilot of the Special Forces squad. Yui's urge to tinker was too great however, so she sometimes oversees maintenance whether she has permission to do so or not.

Having studied history in the process of researching classic and modern engineering, Yui understands the jinx that certain items have on pilots (Pine Salad, Extra-Large Steak, Music Boxes, etc.) and warns people to stay away from them before a sortie. She also avoids them herself.[1][2]

Yui serves as one of the player's possible representative characters in Ultimate Frontier. Her name can be changed in the beginning if she is selected. She is still playable in Triangle Frontier but her name cannot be changed anymore.

Yuuto Kagura
Classmate and wingman. They got closer as friendly rivals after realizing that they can keep up with each other in their respective specialties, namely training and eating contests.[2] 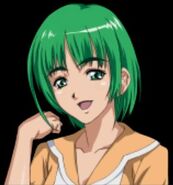 Retrieved from "https://macross.fandom.com/wiki/Yui_Hoshimura?oldid=39430"
Community content is available under CC-BY-SA unless otherwise noted.