Yuuto is a high-spirited youth. People close to him also see Yuuto as an honest and serious person.

Though prone to fits of self-doubt, he conceals it with with a mask of self-confidence that sometimes borders on conceit. Loves training more than anything else.[1][2]

Yuuto has the skill sufficient enough to to operate different kinds of variable fighters and Destroids. When he gains the option to get Macronized, Yuuto can also utilize Zentradi battle armor.

Yuuto's physical endurance is almost beyond human. He attributes it to a self-styled spartan training menu starting with a 15km run that he does everyday without fail barring emergency sorties.[1][2]

A rookie pilot who has dreamed of becoming one ever since he was little, Yuuto's love of physical training often goes overboard and almost nobody can keep up with him once he gets his groove. Loves taking aviation photos in his free time.

Though currently attending Mihoshi as a student, Yuuto is actually a pilot for the NUNS Special Operations squad.[1][2]

Yuuto serves as one of the player's possible representative characters in Ace and Ultimate Frontier. His name can be changed in the beginning if he is selected. He is still playable in Triangle Frontier but his name cannot be changed anymore.

Miyuki Shirakawa
Classmate and one of Yuuto's potential wingmen/support characters in-game. In Triangle Frontier, they are revealed to be childhood friends.

Yui Hoshimura
Classmate and wingman. Yuuto sees her as a rival in both eating contests and physical training. 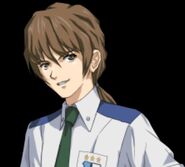 Yuuto's profile in MTF's Academy Mode.
Add a photo to this gallery

Retrieved from "https://macross.fandom.com/wiki/Yuuto_Kagura?oldid=39428"
Community content is available under CC-BY-SA unless otherwise noted.